Systemic lupus erythematosus (SLE) is a complex autoimmune disease with genetic and environmental contributions. Hallmarks of the disease are the appearance of immune complexes (IC) containing autoreactive Abs and TLR-activating nucleic acids, whose deposition in kidney glomeruli is suspected to promote tissue injury and glomerulonephritis (GN). Here, using a mouse model based on the human SLE susceptibility locus TNFAIP3-interacting protein 1 (TNIP1, also known as ABIN1), we investigated the pathogenesis of GN. We found that GN was driven by TLRs but, remarkably, proceeded independently of ICs. Rather, disease in 3 different mouse models and patients with SLE was characterized by glomerular accumulation of patrolling monocytes (PMos), a cell type with an emerging key function in vascular inflammation. Consistent with such function in GN, monocyte-specific deletion of ABIN1 promoted kidney disease, whereas selective elimination of PMos provided protection. In contrast to GN, PMo elimination did not protect from reduced survival or disease symptoms such as IC generation and splenomegaly, suggesting that GN and other inflammatory processes are governed by distinct pathogenic mechanisms. These data identify TLR-activated PMos as the principal component of an intravascular process that contributes to glomerular inflammation and kidney injury. 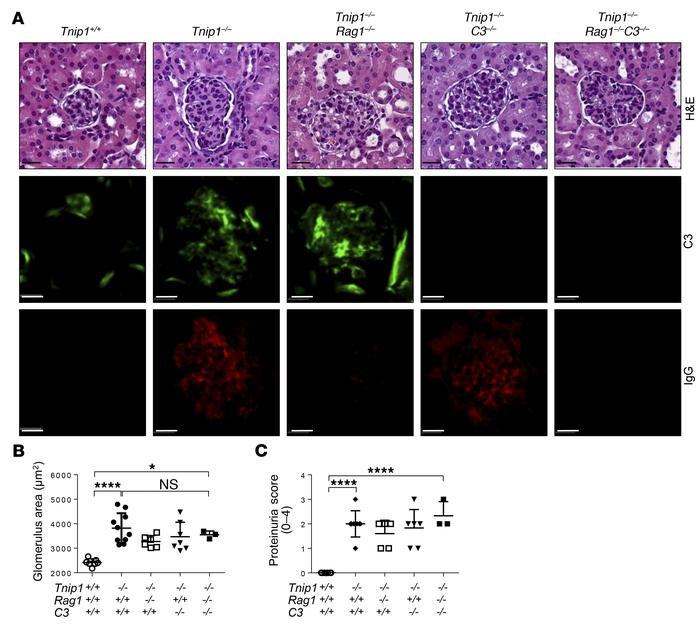 (–) Kidney pathology and function of 12-week-old mice of the indicated genotypes as analyzed by () histology based on H&E staining and staining for Abs against C3 and IgG, () measurement of average glomerulus size, and () measurement of protein concentration in urine. Representative images of glomeruli are shown (scale bars: 20 μm). Symbols represent data from individual mice. Data represent the mean ± SD. * < 0.05 and **** < 0.0001, by 1-way ANOVA with Tukey’s multiple comparisons test.