While the genomic binding of MYC protein correlates with active epigenetic marks on chromatin, it remains largely unclear how major epigenetic mechanisms functionally impact the tumorigenic potential of MYC. Here, we show that, compared with the catalytic subunits, the core subunits, including DPY30, of the major H3K4 methyltransferase complexes were frequently amplified in human cancers and selectively upregulated in Burkitt lymphoma. We show that DPY30 promoted the expression of endogenous MYC and was also functionally important for efficient binding of MYC to its genomic targets by regulating chromatin accessibility. Dpy30 heterozygosity did not affect normal animal physiology including lifespan, but significantly suppressed Myc-driven lymphomagenesis, as cells failed to combat oncogene-triggered apoptosis as a result of insufficient epigenetic modulation and expression of a subset of antiapoptotic genes. Dpy30 reduction also greatly impeded MYC-dependent cellular transformation, without affecting normal cell growth. These results suggest that MYC hijacks a major epigenetic pathway — H3K4 methylation — to facilitate its molecular activity in target binding and to coordinate its oncogenic program for efficient tumorigenesis, meanwhile creating “epigenetic vulnerability.” DPY30 and the H3K4 methylation pathway are thus potential epigenetic targets for treating certain MYC-driven cancers.

DPY30 is important for efficient binding of MYC to its genomic loci. 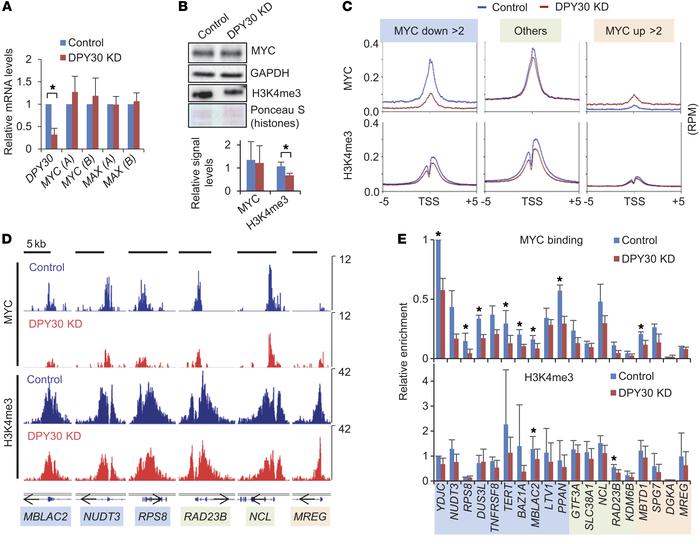 () , and mRNA levels were determined by qPCR using 2 different primers for and and normalized to from 5 independent KD assays in P493-6 cells. () Total cell lysates from control and DPY30-KD P493-6 cells were used for immunoblotting with the indicated antibodies and for Ponceau S staining of histones. Graph shows the relative signal intensity, which was calculated as the ratio over GAPDH (for MYC) or histones (for H3K4me3) from 3 samples each. ( and ) Analyses of ChIP-seq from control and DPY30-KD P493-6 cells. () Composite profiles of MYC ChIP signals (top) at TSSs are grouped (and color coded) by the fold change upon DPY30 KD in P493-6 cells. There were 9,233, 9,457, and 33,451 genes in which MYC binding was reduced by more than 2-fold (MYC down >2), increased by more than 2-fold (MYC up >2), and changed by less than 2-fold in either direction (Others), respectively. The corresponding H3K4me3 ChIP signals are also shown for each group of genes. () MYC and H3K4me3 ChIP-seq profiles for representative genes within each group shown in . () Multiple genes within each group shown in were validated by qPCR for MYC and H3K4me3 ChIP at TSSs, calculated from the ratio of the percentage of input value for each locus over that for the site in the control sample from 3 independent KD and ChIP assays in P493-6 cells. The results of individual repeats are also shown in . Data represent the mean + SD (, , and ). * < 0.05, by Student’s test.